Focusrite MiniNova is a powerful mini-keys synth with incredible performance controls, which enable you to tweak and warp the onboard sounds and your own voice. It has the same synth-engine as UltraNova, and comes with 256 sounds. It also has a fully editable Nova-class synth engine. MiniNova’ s compact size, massive sound, and performance/editing controls make it perfect for producers, gigging musicians, and anyone creating music with computers. It can also be a 37 key controller keyboard with MIDI I/O. The VocalTune and vocoder enable you to recreate classic vocal effects, as well as new voice-bending possibilities. MiniNova has 256 onboard sounds and space to save another 128 sounds. It comes with a free software Patch Librarian so you can store as many sounds as you want on your computer. MiniNova has knobs that allow you to tweak and edit sounds, but it can also ‘animate’ sound with 8 back-lit buttons. These trigger ‘mods’ in the synth engine can warp sound in incredible ways. There is also a large knob for filter cutoff so you can get instant control. You can run your voice through MiniNova’ s effects engine and there is an input into which you can plug a guitar or any other instrument and give it the same treatment. MiniNova has an enormously powerful synth engine with 14 conventional waveforms to choose from, 36 wavetables, and 20 digital waveforms. Each of the 3 oscillators (per voice) have density. There are 14 filter types, 6 envelope generators, 3 LFOs and 20 modulation slots where you can link modules of the synth engine together to shape sound. MiniNova can add up to 5 effects to each voice including distortion, reverb, chorus/phase, delay, compressor, EQ and Novation’s unique gator effect. Editing sounds in such a powerful synth can be overwhelming, so we’ve created the MiniNova Editor which works as a plug-in within your DAW or music software. You can fully edit MiniNova using the hardware and the software makes it easier to see what you are doing.

MiniNova is a compact, super-cool studio and live synth with the same sound engine as its big brother, UltraNova. It comes with 256 incredible onboard sounds that you can tweak with five knobs, or totally warp with eight ‘animate’ buttons. It has up to 18 voices with as many as five synth effects on each sound. MiniNova also has an onboard VocalTune effect as well as a classic vocoder so you can recreate iconic vocal sounds from hip hop, urban and electronic music.

But don’t let its size fool you. MiniNova is the latest in the ‘nova’ range of synths dating back to the legendary Supernova series. It has the same incredibly powerful sound engine and synth effects as the Novation UltraNova, which means it is capable of creating and editing massive bass synth sounds, soaring leads, lush pads and vintage synth sounds. All this in a 37 mini-key form with a USB port and MIDI I/O that you can hook up to your laptop and control your music software, or connect it to another keyboard or sound module. 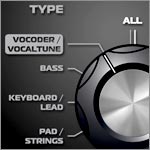 Editing sounds in such a powerful synth can be overwhelming, so Novation created a software application that gives you visual access to the synth engine. The MiniNova Editor works as a plug-in within your DAW or music software. You can fully edit MiniNova using the hardware; the software just makes it easier to see what you are doing. 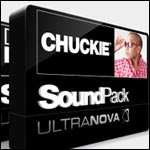 Choose Your Sound–and Get More for Free

MiniNova has 256 onboard sounds and space to save another 128 of your own sounds. You can quickly search for sounds by selecting the style of music you’re making, or the type of sound you’re after–whether it’s bass synth, lead, hip hop or techno. MiniNova comes with free software, Patch Librarian, so you can store as many sounds as you want on your computer. If 256 sounds are not enough, there are numerous soundpacks for MiniNova assembled by renowned artists and sound designers, including plenty of vintage synth sounds. 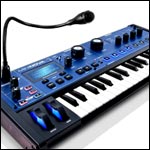 The Synth Engine and Effects

MiniNova has an enormously powerful sound engine and synth effects, unheard of in a micro synth. There are 14 conventional waveforms to choose from (square, sine, sawtooth, pulse, triangle and combinations), 36 wavetables and 20 digital waveforms. Each of the 3 oscillators (per voice) have density/detune for fattening up sounds, virtual sync and ‘hardness’–which acts as an additional lowpass filter. There are 14 filter types, 6 envelope generators, 3 LFOs and 20 modulation slots where you can link modules of the synth engine together to shape sound. MiniNova can add up to 5 effects to each sound including distortion, reverb, chorus/phase, delay, compressor, EQ and Novation’s unique gator effect. 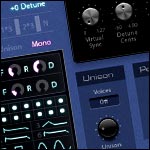 MiniNova takes vocal effects one-step further. As well as a vocoder, it has VocalTune. This means you can talk into the mic and play the tune you want your voice to follow on the keyboard recreating those classic hip hop/urban vocal effects. You can also run your voice through MiniNova’s effects engine, adding reverb, distortion, chorus/phase, gator compression or EQ. This doesn’t need to be limited to your voice; there is an input into which you can plug a guitar or any other instrument and give it the same treatment. 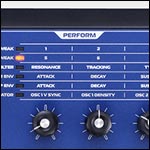 The ‘Perform’ section enables you to access the synth and effects engines by switching between 6 positions to assign 4 knobs, giving you instant access to 24 sound-bending parameters. 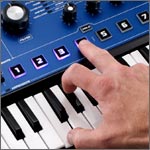 Live Synth: Tweak and Warp Your Sounds in Real Time

8 animate buttons enable you to warp and twist sounds in real time alongside a dedicated filter knob, 4 editing knobs and oversized pitch and modulation wheels. 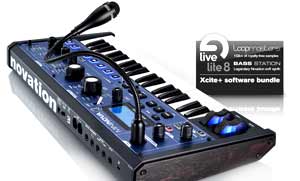 MiniNova is also a great compact desktop keyboard for triggering software instruments. It has physical MIDI I/O ports for triggering other external sound modules–or for connecting to a larger keyboard.

Since Novation was born back in 1992, the company name has become synonymous with world-class analogue modeling synthesizers and unrivalled MIDI controller keyboards and solutions. The product range continues to receive critical acclaim from the music press and win numerous awards for outstanding technology and usability. Fantastic build quality, true musical instrument feel, and intuitive controls are just three of the reasons why Novation’s digital musical instruments are simply a joy to play. To keep products up to date and in tune with the user’s needs, Novation continually provides improved operating systems and brand new software available for download. Firmware updates are fueled and inspired by suggestions from existing users, so comments about Novation products are actively encouraged.

Hugely powerful mini-synth with Nova sound engine
Vocoder with unique VocalTune, pitch correcting effect
Tweak and warp your sounds in real-time
256 awesome onboard sounds; additional free soundpacks downloadable on registration, including the 30 Giorgio Moroder-inspired patches
Layer up to 5 effects per voice. Novation now offers a 3-Year Warranty on this and all other Novation products.

There are no reviews yet.

Midiland Shop is an online store where you can find the best Amazon products related to different niches.

We know that it is hard to find the awesome products on Amazon that suits your needs best. You spend hours if not days researching your desired product on Amazon but none fits your needs. We are here to help you.